Is your voice your future? With more and more computer programs such as Siri, Cortana and Google Now, people are hands free when performing searches. With this in mind, instead of typing in generic terms, we seem to be asking questions. How can we ever forget the polite grandmother who used, ‘please’ and ‘thank you’ in their search?

Advancements in artificial intelligence means that in the future we may be talking to these computer programs just as if they were a real person. We can already imagine a world like this through the eyes of Spike Jonze who directed the 2014 film, Her starring Joaquin Phoenix and Scarlett Johansen, however can this become a reality one day?

The biggest issue on our minds is, ‘Will this affect SEO?’. Are strategies going to have to change from ranking for keywords to ranking for whole sentences? Firstly, let’s look at when people would use voice search. According to research by Google back in 2014, 55% of teens and 41% of adults use voice search more than once a day, mostly when multi-tasking, such as cooking, in the bathroom and exercising. All of these tasks are pretty much done in the home, we hardly see many people in the street talking to their phone to write a text to their friend to tell them they are going to be late for their meeting. There still seems to be a sense of embarrassment when using such programs in public.

Just as with computers, until you tell it what to do, it just sits there. It might make life a little simpler or convenient but we will still need to be a part of the process. It might make a difference to local searches in the short term but long term, it will depend on how AI progresses and also whether we will ditch PC’s all together and opt for mobile. With Google favouring mobile after Mobilegeddon we can see the faith they have in mobile and hopefully voice search advances in a way we would never expect. 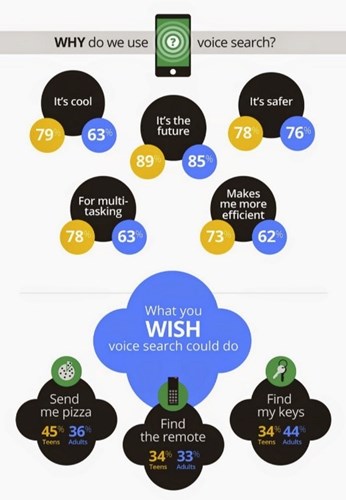