It’s World Emoji Day today! (17th July) What once was pictures in messages have become a part of everyday life to easily express and convey our emotions. Did you know you can now search on Google with emoji’s? I know you are going to try it now! Currently, there aren’t too many results but previously no results would show. There is also an emojipedia for those who are not what the emoji is meant to be! Even celebrities have joined the game and creating their own line of emoji’s. Kim Kardashian recently released her latest line of ‘Kimoji’ which also includes her emoji’s on wrapping paper and phone cases. It was also announced that the new Apple iOS 10 will have the ability for you to tap a word and it will turn into the appropriate emoji. So, should brands also dive in to the world of emoji’s? Well, that depends on many factors such as whether your brand can actually use it. Last year, pizza chain, Dominoes made it possible for you to order a pizza to your doorstop by tweeting a pizza emoji. Of course, there is some behind the scenes work that needs to be done initially so it is not a simple as it looks. Nevertheless, with the success of this initial campaign, it is now possible to order using many different devices including smart watches and even your voice.

The Marvel comics movie franchise have also used emoji’s as part of a campaign to promote the film, Deadpool. Whilst this was a good idea, it was one that you had to think about rather than the blaring obvious. According to social media analytics, Social Bakers (http://www.socialbakers.com/) compared to 2014, there has been huge increase in brands using emoji’s. 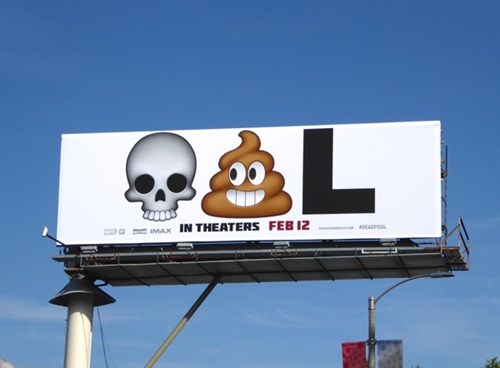 What can we learn from this? Emoji’s are constantly increasing in popularity; it is a way to connect to a consumer on a different level. However, you must use it only if it right for you. We may see in the future when emoji search becomes more popular that we will have to cater for bots but for now, we should design these for humans. You should have also noticed in recently, hashtags on Instagram and Twitter now also include the growing phenomenon.